Jim Gilliece was a d.w. eye favorite that I did not know during my tour of duty at the club back in the late 70’s/early 80’s.  I knew Jim had been a part of Chip Chinery’s Comic Relief show in 1991, but I never met him until last summer’s Reunion show.  One of the great things about the reunion was that so many people – performers and fans – came out of the woodwork to celebrate the legacy of d.w. eye.  It’s been more than a year now, and I can still barely describe what an extraordinary, funny, emotional evening that was.

One of the highlights was getting to meet Jim for the first time.  As you can see in the video, he was warmly called to the stage by an audience that knew and loved him.  And not just from his stand-up, but from his years of running Chez Nora in Covington, KY.  Jim, I learned later, came out of stand-up retirement to do that eye reunion show – and as you can see – when he performs he is totally in control of what he’s doing onstage.  I vividly remember watching his act and being deeply impressed.  I got to spend some time with him after the show, and he wasn’t just funny, but tremendously sweet and generous to boot.

Jim passed away this past Saturday from lung cancer.  I feel honored that I got to share an evening with him.  You can read more about him here.

And, from Chip Chinery, here’s Jim’s performance at the 1991 Comic Relief Show.

And now…videos of (almost) the entire show!

The eye Reunion made the cover of the Cincinnati Enquirer’s Weekend edition.  Great article.  You can read it here. 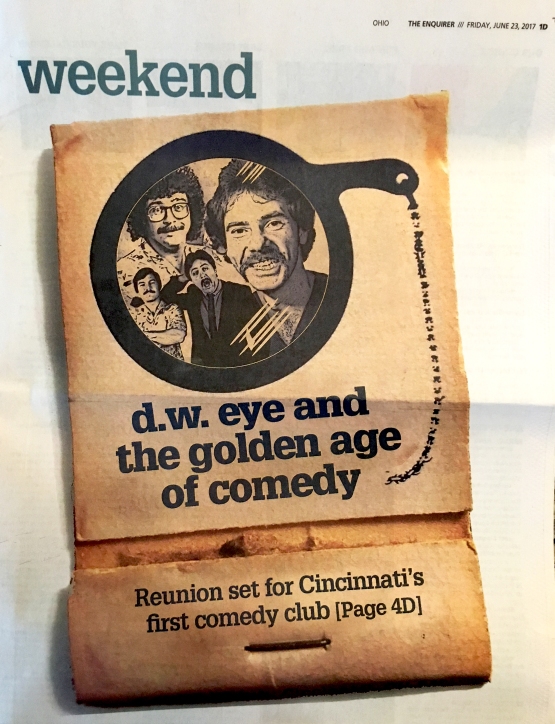 What don’t you already know about Drew Hastings?!  You know he’s a hugely popular comedian, storyteller, Mayor, and farmer – they love him at agricultural events – he can do comedy and drive a  tractor!

But did you know he got his start in comedy way back in 1980 at the eye?

Drew was far and away the tallest, best dressed, best coiffed comic at the eye. (Likely, he was the best dressed, best coiffed anyone at the eye.)  With wavy, blown-back 70’s hair, a full mustache – styled, not barbered – and well-tailored, faux-Armani suits, Drew had the elegance of a man fresh off the dance floor without ever having broken a sweat.

Drew will be appearing in the d.w. eye Reunion Show Friday June 23 at the 20th Century Theater in Cincinnati.

Steve Caminiti came onstage at the tail end of d.w. eye’s brief lifespan but that didn’t stop him from becoming a major force in comedy.  Hugely popular in Cincinnati, Steve was recently named Top Comedian by Cincinnati CityBeat Magazine.  Steve hosted FOX Sports Ohio’s Beer Money and he continues to tour nationally. Constantly.  Like – all the time.

Of all the eye comics, none may be more “of Cincinnati” than Steve.  While most of the eye comics moved on to different states and/or commercial endeavors, Steve kept pounding it out – night after night – right here in the Queen City.

Steve will be appearing in the d.w. eye Reunion Show Friday June 23 at the 20th Century Theater in Cincinnati.

When I was 16 and performing at d.w. eye, I wanted to be Rico Bruce Wade.  (Of course he wasn’t Rico Bruce Wade back then – he was Rico Rico Rico Diaz.)  Rico was our improvisational genius – he was one of the founding members of Cincinnati’s Fairview Impromptu Band – and then later went on to Second City to act and direct.  But in 1981, he would climb the stage at the eye – and you never knew what was going to happen.  Rico and his group were doing improv in Cincinnati before people knew what improv was.  It was exciting, breathtaking.  And live on the spot.

And it didn’t hurt that Rico was also the sunniest, nicest guy around.

Rico continues to act, and perform stand-up and improv to this day – and will be onstage in Cincinnati performing again at the d.w. eye Reunion June 23rd at the 20th Century Theater.  You don’t want to miss it. 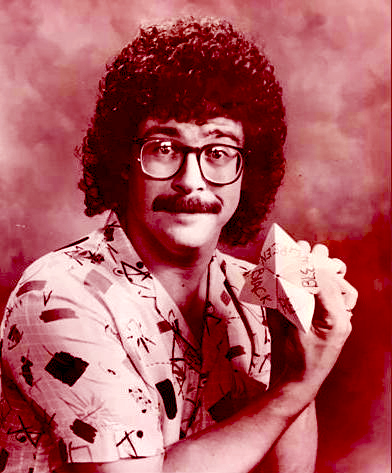 Maybe you grew up with him on the Channel 19 Kids Club? Or maybe he was your TV anchor on WCPO-TV in the ’90s! But Michael Flannery got his start at a little known hole-in-the wall comedy club named d.w.eye!  And now, he’s one of the original comics featured at the d.w. eye reunion on Friday, June 23! WOW! 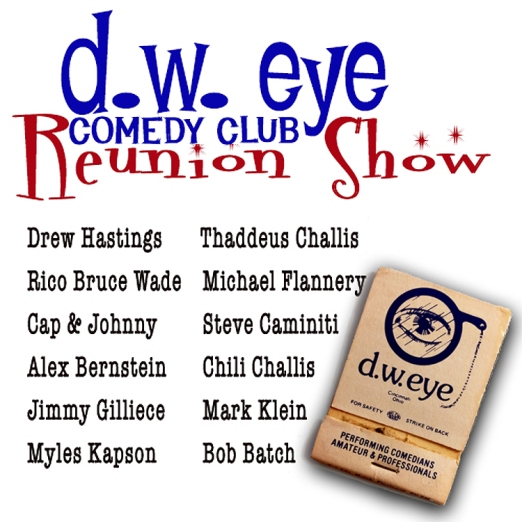 On Saturday nights, the pros invade the d.w. eye spotlight and the occasional hearty chuckle is supplanted by the outright belly laugh…  The quality of Saturday nights at d.w. eye proves that there are a plethora of anonymous looney tooners out in the Midwestern Hinterlands.

Here’s the full April, 1981 Cincinnati Magazine article by Britt Robson that first introduced d.w. eye to the public.  The eye was doing well before this article was published.  After the issue came out, the club exploded.

Read the full article here.  Even the ads are cool.

And don’t forget to get your tickets to the d.w. eye reunion, June 23rd at the 20th Century Theatre!